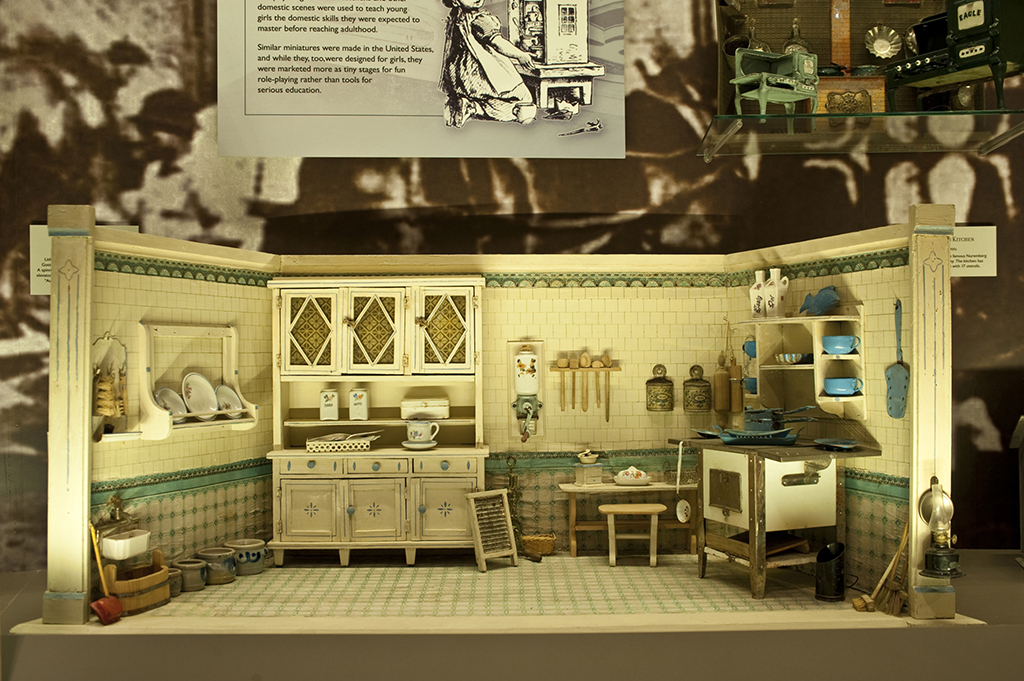 Created by the Moritz Gottschalk toy company, circa 1909. Prior to acquisition, this piece was located at the Nuremburg Museum. This piece does not have a standardized scale.

This antique kitchen is in the shape of a trapezoid, with three interior walls and no ceiling to allow for easier access. The two side-walls are 18 inches long and directed inward and joined to the rear wall which is 27 inches long. These three walls are each 18 inches high. Like most miniature works produced prior to the 1970s, this kitchen was not built in a particular scale: some of the objects seem too large in scale to exist in this kitchen, created instead to be held and played with by a child. This is a key distinction, as the kitchen was intended to be played with as a learning tool for young girls, whereas many modern room boxes and pieces in our collection were built strictly to display fine scale miniature objects and were not intended to be objects of play.

The walls of the kitchen are covered in lithographed paper imitating delft tiles in white with blue accents. The floor is also covered in patterned paper, imitating white octagon tiles with repeating blue diamond shapes at each corner interval. Nearly every object in the kitchen is white or blue, in keeping with this palette.

This kitchen was built for interaction. Beginning on the left, there is a small sink with a faucet attached to the wall. The sink functions when a small tank behind the wall is filled with water, allowing the water to flow through the faucet when the handle is turned. Higher up on the wall above the sink and to the right is a white wooden dish rack with white dishes. On the ground to the right of the sink are stoneware pots, lined up along the wall. Against the back center wall is a white wooden hutch with three cupboards above and three cupboards below and three drawers and shelves in between. On the wall to the right of the hutch is a small coffee grinder which functions when the attached crank is turned clockwise. Pressed against the back wall is a small rectangular table with one small stool, not for dining but instead for prepping, chopping, and rolling out dough. Above the table on the wall is a wooden rack with wooden kitchen necessities, such as spoons and a meat tenderizer. The right wall of the kitchen features the large metal stove, square in shape with a simple, flat metal range that could be heated when a child placed a candle inside the stove's interior. Large, white wooden shelves sit on the wall above the stove, containing blue enamel dishes. To the right of the stove, leaning against the wall, are three functional miniature bristle brooms and above the sink are four hand brushes and a dust pan- included so that a young girl could practice kitchen cleanliness. There are numerous canisters in the kitchen, dotting the shelves and attached to the walls, labeled with the German words for their imagined contents: sugar, coffee, flour, salt, vinegar, and oil.

This kitchen is over 100 years old and its age is readily apparent. In spite of being restored by museum conservationist Casey Rice in 1987, the kitchen walls and all of the objects have the dull sheen of old age. The lithographed paper is peeling in some places, torn and stained and yellowing. The metal canisters are edged in rust, and the enamel wares have worn patches where the blackened metal glares through. There are nicks in the wood and soot marks. You can almost smell the musty odor of the wood from generations of trapped moisture and smoke. All of these tell-tale signs are merely indicators of the passage of time, evidence that this kitchen was once well-loved. Though it has been vacant for many decades, it stands as a testament to the simplicity of a bygone era, with outdated contraptions alongside objects still familiar and in use today. The popularity of miniature kitchens such as this one were one of the early predecessors of the dollhouses which we know and love today.