Turning and shaping metal was a passion for machinist Abraham Megerdichian. During his lunch breaks at General Electric where he worked as a machinist, he would sift through the metal scraps dumpster looking for materials he could use to machine utilitarian objects like a vase or candlestick. As his skill increased, he challenged himself to make intricate and detailed miniatures of everyday objects which he gifted to family and friends. 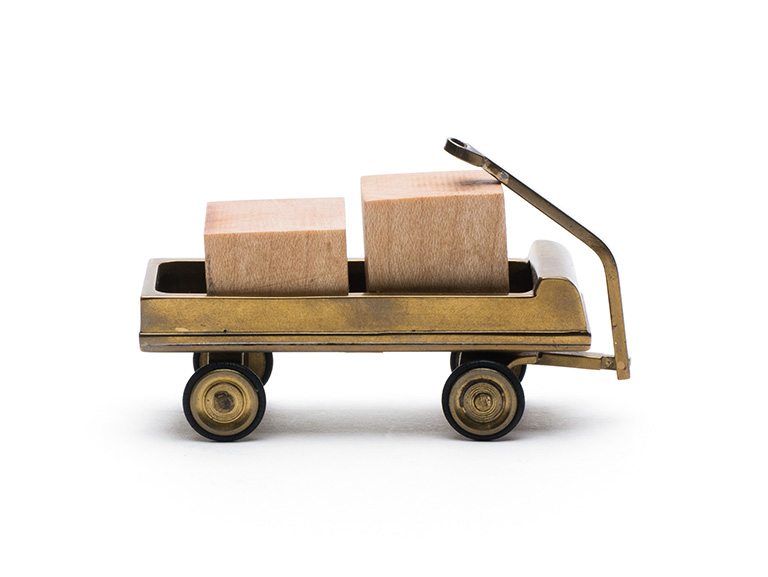 While organizing his basement, Robert Megerdichian’s wife Becky came upon a hefty wooden crate on casters and inquired of her husband, “What’s in the box?” The box, constructed with reinforced edges, heavy-duty handles and a plywood lid with bolted hasp for a lock on the front, had belonged to Robert’s father Abraham. The trunk built by Abraham Megerdichian was filled with small-scale machined metal sculptures, special gifts Abe had created and given to family and friends. Robert went searching for the keys to open the box. The keys were easily identifiable because they were tagged with a handwritten note in Armenian script, “ayn irery, voronk’ yes patrastel yem” “այն իրերը, որոնք ես պատրաստել եմ” which translates to “The things I’ve made.”

Abraham Megerdichian was born in Franklin, Massachusetts in 1923 to Armenian immigrants. He grew up in Cambridge and attended Rindge Technical School prior to enlisting in the Navy, through a special machinist’s training program. After his service, he returned to Cambridge. It was the 1950s and the machine skills he learned at school and in the military helped land him a job as a machinist for General Electric. He soon married and became the father of three children.

Abe enjoyed machining so much that he wanted to machine metal in his free time. During his lunch breaks at work, he would sift through the scrap metal dumpster looking for materials he could use to machine utilitarian objects for his home. He collected odds and ends and fashioned the pieces into various items- a replacement handle for a wagon, a pipe, a pan, a vase. His son Robert recalls, "He machined all these pieces for the house, at first a lot of them were very practical. But his hobby evolved into a passion for these elaborate metal miniatures." As Abe’s skill developed with each project, he found himself wanting to push the limits of his craft. This led him to use his lunch hour and evenings turning, milling and drilling smaller more complicated objects from the scrap pieces of brass, aluminum, copper and stainless steel he collected from the discard bin. 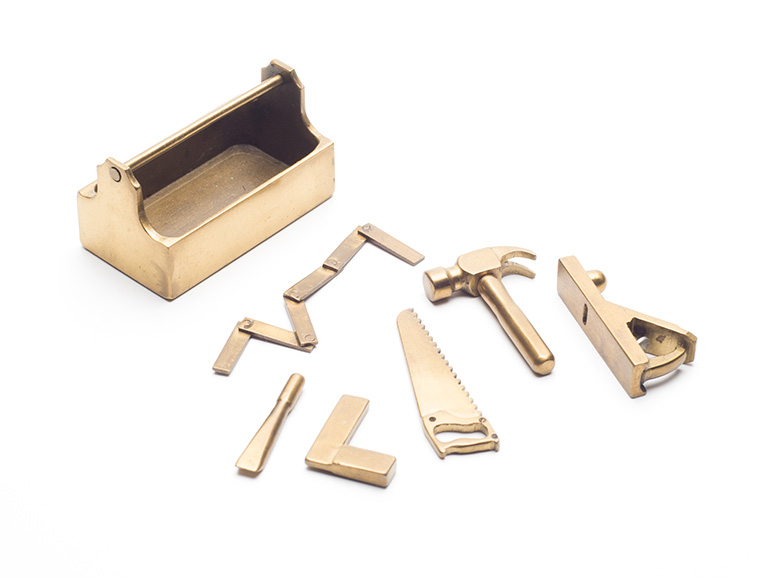 A guy with a big heart and a sense of humor, Abe wanted to share his machined miniatures with the people he loved- his family and friends. Motivated to make personal gifts for birthdays, holidays and special occasions, the subjects of Abe’s small sculptures were determined by his relationship to the recipient. As his son Robert put it, “he crafted for them special keepsakes, always the heaviest wrapped gifts despite their small size”. Everyone looked forward to receiving a meaningful small-scale sculpture from Abe.

Abe worked as a machinist for GE making aircraft engine parts for 40-years and outside of his day job he machined more than 300 tiny treasures. He passed away in 1983 at the age of 59. Since he was so prolific, Abe built a “soondoog”, Armenian for storage crate, to store the sculptures he created for his immediate family. Robert, who had been entrusted with the soondoog after his father’s passing, had kept it stored in the basement. When his wife came upon it in 2013 while they were cleaning out the basement, they decided to open it. They began to unpack the objects one by one marveling at each piece they unwrapped. After two hours Robert realized what a talented artisan his dad had been and made it his mission to share his father’s machined miniatures with the world. The Mini Time Machine Museum is delighted to be the first venue west of the Mississippi to exhibit Abraham Megerdichian’s machined metal miniatures.

On June 7, 2022, the artist’s son, Robert Megerdichian, spoke about his father’s art and told stories about the pieces on display in this introduction to the exhibition.

On August 11, 2022, Robert Megerdichian gave a virtual followup lecture sharing more stories of his father's work and showing items beyond the Sculpture from Scraps exhibition.

Our 2022 Exhibition Season is supported in part by Sterling Investment Management, LLC, a private, independent, employee owned investment management boutique. For over 25 years, this Tucson-based firm has created sophisticated portfolios of individual securities designed to meet each client’s financial planning objectives. Their long-standing tradition of growing and safeguarding their clients’ wealth on a risk-adjusted basis has defined the success of both their clients and Sterling since 1995.

Our 2022 Exhibition Season is supported in part by the Arizona Commission on the Arts, which receives support from the State of Arizona and the National Endowment for the Arts.